hello folks, yesterday my stereo was working fine, I parked the car and the buttons blocked with the power on, I cannot power off the radio, the quick solution was to pull off the minifuse #10 behind the glove box... I waited about 5 minutes, reinstalled the fuse and the stereo returned to work normally...
has anybody experienced some similar behavior?
shoud I check something else?
my stereo is exactly like the image below 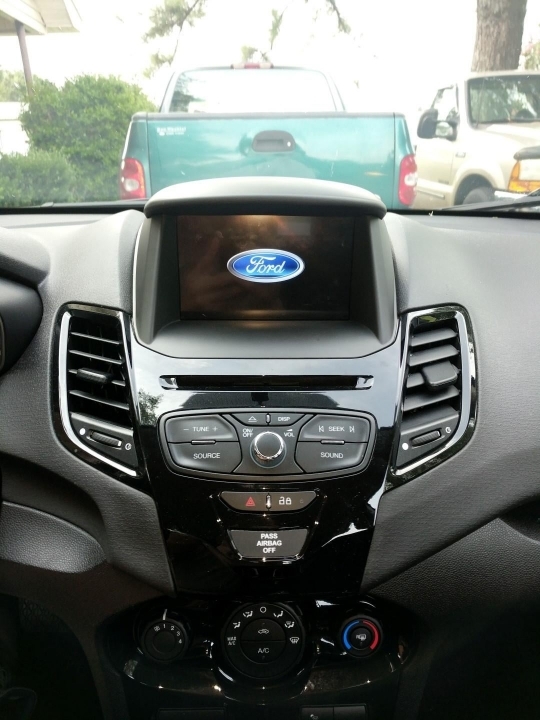 Have you been able to do the latest update? I believe that you can get it through www.syncmyride.com. i would suggest that you have your fiesta battery "load tested" to confirm that it doesn't have some dead cells or isn't experiencing an internal short that would cause a loss of cranking amperage or a drop of stable voltage. Those issues can cause many strange things to occur.
When i did my last update, i attached a digital battery charger to the battery after i parked in close range of my wifi router. The update took almost two hours of key on/engine off downloading time.
So be prepared for a wait.
And keep us informed of the outcome.
OP
S

thanks a lot for your suggestion, i'll be checking on sunday
OP
S

just checked on the battery, it was ok, stereo is working fine, can't access syncmyride.com because I am outside USA
i'll be checking these days
OP
S

happened again...
radio on and no key responding,

Is your bluetooth on?
OP
S

Handy Andy said:
Is your bluetooth on?
Click to expand...
noup, bluetooth is off both times
H

Ok, I get that screen (black, blank - Hung-up) screen when I bring my phone along and FORGET to turn off the phones Bluetooth and ensure the Syncs' own BT isn't trying to "sync" with it. (Looking for an App)

So was curious - else are you getting really hot days? Some electronics shut down, not due to "electrical fault" but their own in-operation heat they generate as well as are operated in, the car interior - gets pretty warm. Many audio amp modules in todays radios have thermal shut-down built into them, and will shut down themselves - leaving you with what appears as a "Dead radio" because the part used in the Audio Amp - the amplifier module itself - feels the heat building from being operated, on top of, the fact that - the outside temp - can be too much heat and shuts down - they don't make them like they used to.
The construction of the Sync DIN radio is not like other aftermarkets that seem to have more experience and know-how to understand that people will crank up radios and have moments of I gotta hear that again - you may not have those tendencies, but someday you may be waiting at a light to change and the guy pulls up next to you blaring out their music for the entire city block to hear.

Other efforts; like knowing the IMPEDANCE load the speaker presents itself as to the Audio amp. The right measure of resistive loading to match the expected load the module is designed to load into - can go a long way in making the radio live a lot longer. Some of the Fiesta's have 6 speakers. Two pairs are "tied" in parallel - front and single in rear, presents an impedance load of 2~3 ohms instead of 4~8 ohms - makes it pull a lot more current thru the amp so it can push its' music to the speakers for you to enjoy the moment.

Before, (its' been a decade but seems a lot shorter than that) the radio had a big heat sink and thicker metal panels to hold itself to the DIN cubby - offered a way to transfer heat away. Mine did something similar to yours - so the first time - the last time, I looked at my unit - it doesn't have the external fins. It's a square rectangle "box". Metal yes,- it's about the same "gauge" as the tin cap off of a Dinty Moore Stew. it may have those modules bolted internal mounting to transfer heat away, but that does you no good when it's never transferred to the outside.

Look at the dashboard - little ventilation - Can't equalize, or find thermal equilibrium from inside to outside. The problems isn't just the heat the parts produce - it's not just the case and what's' inside it - the case sits in the heat too. Thin materials may take up heat faster - but they can't dissipate the heat when the heaters on or the outside temp is nearing the 35~38 C outside. Not without ventilation. Metals' heat transfer works both ways - and transfers in the heat from outside to the parts inside - while you are driving, same in Summer as in the Winter - does the same effects and results.

Some vehicles ventilation used to "leak air" behind the dash to help reduce the dashboard console and speedo/odo/gauge cluster to help reduce fogging.

They just want to save weight - less mass, more inertia...

There's another thread of a similar situation - may be more electrical glitches but still something you can read thru and possibly help you out.

update:
today I remembered that was a SDCard in the console between front seats... I tried to play music files from there and the SDCard was not detected but it was inserted, I popped it off and reinserted again, the music started to play and no problems with the stereo so far
maybe the radio was stuck trying to read the sd card...
i will keep an eye on this
H