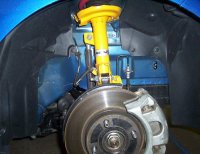 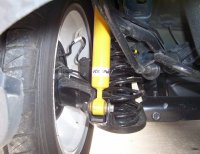 How do you manage to keep that thing so clean? lol
OP

Those images are 2012 and 2015. But it still looks the same. It's not winter or dirt road driven, kept covered and garaged. When I brought it home from the dealership, I painted the brake rotors and front Knuckles as well as the rear brake drums and several other miscellaneous bare metal parts too. It's much easier to keep it up. Beyond a couple of little issues this car has been trouble free for 92 thousand miles!
H

Click to expand...
Thanks! I will post a couple current pics of it soon. I really only posted this here to help counter the impression that many people have that the Fiesta is not a viable candidate for Autocross play! The widespread post regarding the ban of Fiesta only extends to those that are not lowered. I have driven the car pictured here on course to the point I have spun out on both wet and dry autocross courses. I never felt that it was about to flip over. I think that just needs to be said!
H

scotman said:
Thanks! I will post a couple current pics of it soon. I really only posted this here to help counter the impression that many people have that the Fiesta is not a viable candidate for Autocross play! The widespread post regarding the ban of Fiesta only extends to those that are not lowered. I have driven the car pictured here on course to the point I have spun out on both wet and dry autocross courses. I never felt that it was about to flip over. I think that just needs to be said!
Click to expand...
Somehow that's sounds Familiar.

Remember the Suzuki Samurai and Tracker?

Similar issues, seems they too we're easily flipped over - but in owning two different types One GEO and the Other Tracker thru Chevy, they never appeared to, felt or drove, as unstable, top-heavy, easy to flip monsters as others seemed to have claimed. (I've been in one that got T-boned by a left-turner that didn't pay attention - I waked away, they didn't - and they were the ones at fault - it was hit yet still stayed upright) So to me, the hype was just to give bad press to a type of vehicle that was a strong competitor to another of similar type.

So perhaps the "ban" (if you have that link I'd like to read about it) against a rather nimble vehicle seems to be motivated by other means. The stability it exudes while you drive thru downtown road construction and freeway traffic - is why I chose the vehicle. I have yet to discover a hiccup in operation. It's got limitations, but it's also operated under and within the premise that it's not a superheroes' indestructible either - so put the stones away guys, ok?

I am more concerned about the other vehicles' around me and their level of performance. A slow reaction or hesitant vehicle is going to frustrate a lot of drivers to the point they want to get away from them quickly. There are even ads promoting the "Assist" that these said vehicles' autonomous system can provide the driver. However, in viewing the ad, you can easily see it will be left behind and actually cause more of a backup then it calls for in calming, reducing the stress and improving the drive-performance level of the driver. This adds to the level of trust I have to give to the other driver that may not have the level of confidence or competence to handle certain driving conditions. They may wind up being the less likely to survive in the ongoing challenges a driver must face in todays society as well as the road and weather conditions the vehicle is put in. As we progress into more autonomous systems that take the driving experience back to a control module, we lose a little bit more of the ability to "go with the flow" that the human realm takes you in traffic control. This is perhaps from the "Carrot" some automakers have taken upon themselves to show their prowess in technology thru ads to promote sales - because the user owning such a vehicle wants to text and be entertained more than to drive and view the vista of the world not augmented by a headset or a FlatScreen monitor.

It's scary stuff out there.

Now if we can put the emotional wreckage that some of these drivers tend to dump out on the road for the rest of us to drive around and dodge - then we may have a more even playing field in which to discuss and develop a plan to address these "ban" issues...

Hopefully those that have read this far - I wish you a happy Mothers' Day!
OP

Small, short wheelbase SUV's that didn't have stability control, traction control or ABS. And, as an added bonus, had a very high center of gravity were very poor street handlers. The Ford ranger based Bronco 2 was a member of that club. It even came with warning decals on the sunvisor, glovebox door and owners manual that explicitly said that it was not a stable highway vehicle. But, to find the discussion of the SCCA ban of Fiesta you need only look down the index of this section to find it.
You must log in or register to reply here.
Share: Facebook Twitter Google+ Reddit Pinterest Tumblr WhatsApp Email Link