What I Drive
Ford Fiesta se

When wipers set on intermittent make 2 passes then stop in middle of windshield. Work fine on high and low except when I go to shut them off they park wherever they are at when switched off. Normally I would think it a pulse control module but this vehicle is not equipped with one. Please help
A

If all of the harness connections are good, you may need to try resetting your wiper arms at the motor. There are a couple of wrote ups on this... see link below. Otherwise, it could just be the motor going bad.

What I Drive
Ford Fiesta se

I have done more diagnostics. Motor is good control stalk is good. What I figured out is the problem is only happening when highlights are on!! When they are off or just parking lights are on the wipers work fine. As soon as I put the low beams on they will work in high and low but when on intermittent stop and when on high or low when you go to shut them off they stop wherever they are at. I shut lights off turn wipers back on then off and they go back to park position. I’m lost please help
A

Sounds like a short somewhere in your wiring. I would check if there are any signs of a short at the fuse box and go from there. Electrical is not my Forte.
Good luck.
H

Ok, might need to troubleshoot, but wondering if your Fuses in the fusebox, aren't seated properly.

Well, Light switch, when off - Wipers work fine, Lights on - Parks in the middle of your windshield.

Ok, to go a little further into this, the Wiper Motor - should have a switch contact that when the wipers are originally parked, engage - but when you apply power, the wiper motor "wakes up" pulls itself from the switch that engages a set of contacts, to disengage that switch - this is thru a separate wire in the harness going to it - it's live when the wipers are on, to tell the motor to move from park. Once the wipers are operational - the BCM (Body Control Module) handles all the fun.

When that switch is damaged, or the wiring harness has a short somewhere and they had to replace fuses, if the wire harness itself has a burnt section, a carbon trail can form and eventually can cause a short - thru vibration and the wires finally making contact together.

This is where the fuses come in, look for "different package style" or ratings (used a bigger fuse for example - the color would be different) than the OEM - this may indicate previous damage done that you will need to investigate. Don't be a bit surprised to see if Fuses from one area taken out of one Fuse Box location and reused elsewhere and you're left to figure out the rest of this puzzle.

Otherwise, the Wiper motor is suspect has having a bad wire or switch to "park" itself - it may not fully engage (transfer to another) a set of contacts to tell the system it is fully parked - it uses these contacts to allow the Motor to receive a wakeup call and move. IF the wire is open, the motor doesn't receive enough energy to park (run thru and seat the wipers) in which the switch - once it engages, tells the RELAY for the wipers, I'm parked - thanks you can turn off now - which then the Relay powers down and it's done until next time. Instead, it parks itself...at it's default position which would be in-between the set of contacts - the wiper power duration the BCM is to supply - has run out - so has it's power to move - so stops dead in it's tracks...

This goes back to those Fuses again, for loose fuses can cause surges, intermittent operation stuff - acting as if - Steven Spielberg used the vehicle as a "stunt Double" is a Poltergeist reboot.

Or, Wiper switch that goes to the BCM, is faulty and needs someone to delve under the Steering Wheel covers and look for nicked wires.

Below, is not a true representation of your Wiper Motor, but used in the description above to help you understand the Motor wiring and the switch, also how the motor itself has a series of contacts - one of them REVERSES the motor to force the gearing to "Park" the arms - and also reset the motor to allow it to start in the correct direction when they are turned back on. 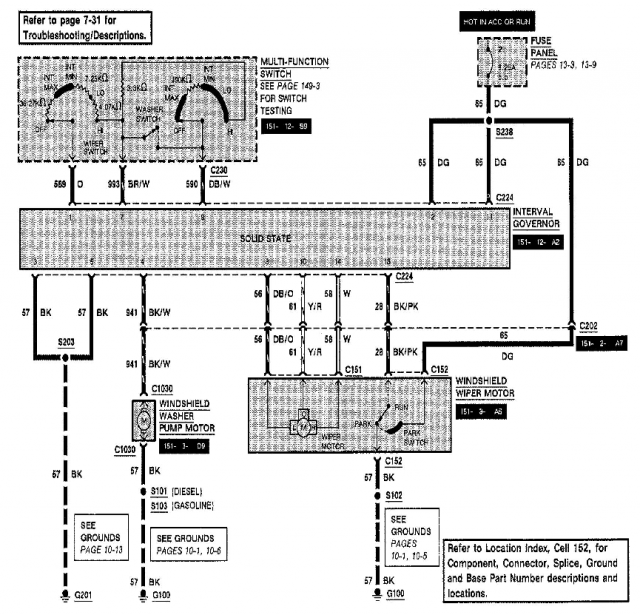 A secondary note, dealing with how the wiring works.

The Wiper Motor has several ground tie off points, one is located under the battery tray.

It's a job, but is worth looking at or into - to investigate the problem. Especially if you have not cleaned the battery off or even looked at it in a while.

You'll have to remove the battery, disconnecting all the power connections - ground and terminal - lift the battery out and even unbolt the Engine Control Module and push it aside to gain access to the battery tray and remove it's bolts and reveal what is underneath.

That is where you may find corrosion and maybe some broken brittle wires from the acids and corrosion agents in this area, you may find you'll have to clean this up and re-establish those ground points and verify the harness wiring that sneaks around this area, is not damaged.

Great advice! The area under/behind the battery tray is a corrosion rich environment. Mostly because it is rarely ever given any attention. I have decided on a two year interval of inspection, cleaning and anti corrosion treatments.
After wire brush cleaning of the ground connections including the little screws that hold the ground wires in place. My "go to" protective agents are good old fashioned Vaseline jelly and an aerosol spray for battery connections that has a red dye in it. They are both very effective.
So many problems with inop or malfunctioning components on our Fiesta's can be avoided with giving these critical grounded connections regular maintenance. This is especially true for anyone who is operating in regions where road salts are used.
You must log in or register to reply here.
Share: Facebook Twitter Google+ Reddit Pinterest Tumblr WhatsApp Email Link