Hello everyone,hoping to find help here.
I have a ford figo 2014 model which is giving me overheating problem, I have temp sensor changed,water pump and radiator as well.So what is happening is,If i drive in the free way exceeding 100km/hr,the car wont overheat but once i get off the free way and enter stop and go in the streets,the overheating light comes on and then you hear the fan running at max volume/speed, if i turn off the engine and start again the light goes off and i can keep driving maybe till i reach destination before it happens again. So to test whats going on, when i get home i parked the car and keep the engine running with the bonnet open to observe what happens..The car would run,i see the fan comes on cool the engine down and stop..the normal process of cooling system by the fan happens well while the car is parked while engine running, no overheating light will come on.So i dont know what is going on ,seems to me when i get off the free way and drive with low gears the fan delays to run and only runs when temp is already on red.I really dont know whats happening .I know this sounds so strange but thats wat is happening. Any help would be appreciated please.

Sounds like symptoms of low coolant/air in the system. If there are no obvious leaks, it may be that the cap on the expansion tank isn't sealing. It's a pressurized system, so that can cause it to overheat.
If that's not the issue, I'd suspect a bad thermostat. The thermostat may look fine but still not be working properly.
OP
W

Hi~Thanks very much,the coolant is okay and i have just checked the cap for expansion tank and it seems like it is sealing properly.I will have the thermostat checked if it happens that it can be new and still be faulty..

Did it start doing this after you replaced the thermostat, or did you replace it after it started overheating?
OP
W

Replaced the thermostat after it was showing the temp light as soon you start so it was not in use,the thermostat was replaced and other thing is that the inside radiator for the heater was bypassed for suspected blockages.The car was perfoming very well after that and then this nature explained above started.

I'm stumped. You can try hooking it up to a code reader.
H

Cn you spend a moment to upload a photo of that engine - we had another member have an overheating problem, only to find out the engine was a diesel - not petrol - motor which just needed to be "regened" as part of the emissions - so their headaches were from the cycling event getting cut off just never completed the cycle.

With the vehicle going into "overheat" - before, you did the right thing by knowing the age of the vehicle - replaced the radiator, thermostat and the temp sensor - yet still overheats - might indicate a plugged hose or bad, mis-laid hose routed and now got kinked - affecting the sensor - or the sensor wiring and even the hoses by it, suffered some type of impact and or failure - so when the service guy replaced the parts, they never bothered to verify the wiring was good ot the pump was working - which now seems to focus more on the Water Pump as having to have failed or getting ready to seize up

Replacing the water pump is the only thing you haven't done.

This is a 2014 and were in the USA - so hope this condition can be resolved by getting your service guy back to it and have them recheck their work.

The car has several variants of engines - mostly 1.4L - in the US - we have a 1.6L version of a similar chassis 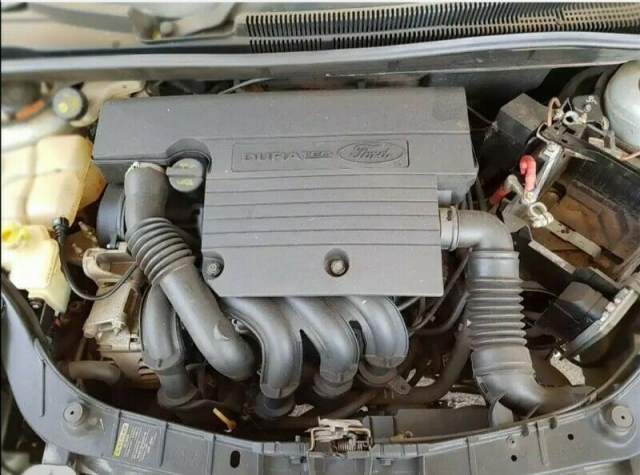 Ive been having the exact same issue in my 1.4 fiesta, I changed my thermostat, radiator, water pump, expansion tank and cap. I even use premium coolant premixed and it still does it. When it starts to heat up I have to rev up between 3000 to 4000 rpm then the temp drops but when driving in stop go traffic the temp goes up again.
H

When you switch coolants - be careful - the system needs a full rinse and purge.
Some coolants are glycol in an organic base while others are glycol - with Phosphate added.

Phosphate and organic types of acid neutralizers (to help control PH in the system at all temps) will not mix well and can separate.

When they do - it forms a thick jelly - much like slime, that won't stay put (Think of this like Mercury) and can form "blobs" and layers and plug a radiator and heater core fast.

Its' when you have to "spin up" the motor does the "blob" get pushed enough to deform and allow flow from pressure differences - you're flat sucking a hose potentially pinching it shut keeping the temperature up in the engine but not where the plug can use the heat to loosen - which is where the plug is at, the radiator. Only the excessive pressure gradient can force flow and then heat soaks in and loosens the mess - only to congeal again once cooled off.

Ok, you can say, I never added anything! Well, that may be the case, but if this car was taken to a shop that you seemed to trust - did they accidentally use a wrong phosphate-based additive to help "lube" and try to prevent a condition? Well, this is the payback...

Do not trust any additive that says "Works in all systems - including yours" - which usually means the advertiser was drunk from drinking the stuff with the staff as they partied the night before...
.
Last edited: Today at 7:36 AM

That actually makes alot of sense. Because the radiator can get clogged very easily. Should there have been a mix of fluids to create a block, will q flush of the system fix it or is there another way to completely rid the system of the gunk to allow for clean coolant to flow?
H

I wish I could give you an easy way to fix this, but honestly - you'll have to remove the fluid, full drain - even pull the thermostat and run the motor with clean distilled or at least filtered water for several minutes to loosen the stuff to get it hot and flush out the old stuff. (Old school)

You don't need a ton of heat - just enough to feel heat out from the heater and let it (heater fan) run on high for a few minutes - then shut off engine - take a 15-minute break - then drain...

While you have the thermostat out, you can inspect it or replace it - this can work in your favor if you just drive the vehicle on a short, Less Than 10-minute, trip to the auto store to get a new thermostat - at least the fresh water is helping to dilute the stuff still in there.

I also take the time while this flush is going on - to find the heater hoses to the back firewall and locate the hose that gets the hottest first - while running the heater and fan on full to help pull heat to help find the hottest hose (this is hot - moving parts too - so care must be taken to prevent burns and injury).

Once you found the hot side of the heater hose system, that side - pull the hose from the engine side (This is where the heater gets the heat from circulation-wise) to let you force water into the heater core and push/flush it out of that core as well. IF you can pull both hoses - even better -then you can flush and backflush the heater core.

If you are home and can afford some time - you can do a backflush, basically is - just pull off the upper and lower Radiator hose - pouring fresh clean water into the upper hose until the scent and color and any old fluid and debris is removed from the bottom hose.